For as much as I love enchiladas, I don't make them nearly enough.  And there aren't a ton of restaurants that will make enchiladas that are vegan or with local, organic cheese.  So I think it's been over a year since I've had any.  That's just wrong.

In my opinion, the key to good enchiladas is a good enchilada sauce.  I usually just wing it- blending up some chiles, tomatoes (or tomatillos), onions and garlic.  But today I wanted to go a bit more traditional and used this recipe.  I used dried New Mexican chiles, though, because that's what I had.  And I doubled the recipe.  And I added 1/2 an onion and 3 cloves of garlic.  And a smidge of maple.  Oh, hell.  I'll just type it out. 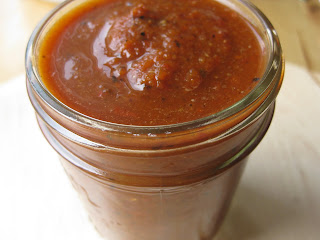 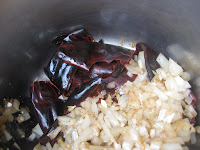 In a dry skillet, toast de-seeded chiles for just a bit - don't let them burn!  Then remove the chiles to a bowl or pan and cover in hot water.  Leave to soak for about 10 minutes.  Heat up the same skillet and add the olive oil.  Add the onions and saute until lightly browned.  Add the garlic and saute a minute more.

Combine onion/garlic mixture with the chiles, all the spices and 2 cups of the reserved chile soaking liquid in a blender.  Blend until smooth.  Taste the sauce.  If it's a bit bitter, add in the maple syrup.  Salt to taste.

Strain the sauce through a sieve, reserving the chile pulp.  [Note: I don't have a fancy blender, so I had a fair amount of pulp.  I'll write about how I used this in another recipe next!]

Heat the strained sauce and simmer about 10 minutes.  Then use your sauce to make enchiladas! 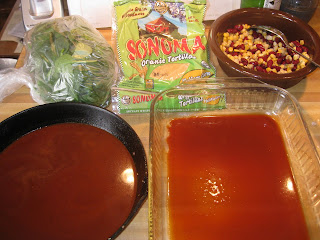 I don't have a real recipe for the enchiladas.  Basically I just dipped my organic corn tortillas in the sauce and filled them with kidney beans, spinach, corn and local/organic cheese.

Then I covered the whole pan in the leftover sauce.  I could drink this enchilada sauce, it's so good.  But I restrained myself. 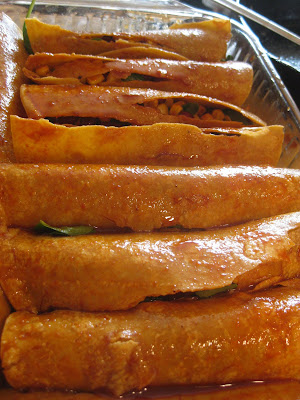 And I don't even have a photo of these all baked up and bubbly, because by the time I got home from work, three quarters of the pan was devoured!

PS: Can you pretty please stop by my blog and vote for me on PETA's sexiest veg next door? THANK YOU!!!

I agree--the key is the sauce, and while I often wing the enchilada part of the recipe, I am not brave enough to wing the sauce recipe. So thank you for sharing yours!

BTW, which location of the Mississippi Market do you work at? I need to stop by the Dale one in the next few days...it would be nice to say hi!

I wonder what magic trick restaurants use to keep their corn tortillas from splitting. Hm.

Will have to try this, I've never made my own enchilada sauce before.

no trick, what you should do is lightly fry the tortillas in oil so that they can stand to the wet sauce...Sauce seems awesome

oh, and in mexico we dont bake the enchiladas

I am not sure if you read your blog comments or not, but I stopped by the Selby and Dale Mississippi Market today--I love exploring new co-ops, lol :-) The store has a great bulk section! I would have loved to say hi, but wasn't sure which location you worked at.

Wait, real cheese? I thought you were vegan.

Courtney- I'm so sorry missed you! Yes, I'm at the Selby/Dale store.

Anonymous #1- thanks for the tip! (I always accidentally rip the tortillas)

Anonymous #2 (or #1 again??)- Yep, it's true. I've been eating some real cheese and yogurt for several months now- so long as it meets my "requirements".

Darn! Well, if I am ever over in St Paul again I am a big enough geek that I would go out of my way to go to a new/different co-op, so maybe we can say hi then :-)

Thanks so much for the post, quite helpful piece of writing.