Last night I really wanted something with mushrooms. I didn't really care what it was, it just needed to have lots of mushrooms. That's usually how I decide what to eat: I crave something intensely and then build a meal around it. (What's really weird is when I crave something I've never eaten before- and, no, I'm NOT pregnant).

I was going to make mushroom wild rice soup, but Mike prefers not to eat soup unless it's my seitan and dumplings, so I decided to make a mushroom pasta dish instead- An instant winner in Mike's eyes. I cooked some fusilli pasta (white pasta, even!). Then I sauteed portobello and button mushrooms with thyme and sage and set them aside. I made the sauce with a flour and Earth Balance roux and added almond milk, tamari, sage, thyme, salt/pepper, a bit of nutritional yeast, and a big blob of plain soy yogurt. 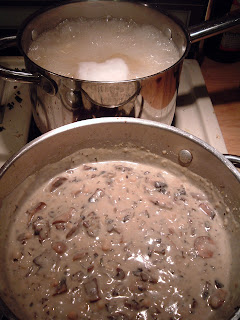 The sauce thickened up nicely and looked a lot like a stroganoff. Mixed with the pasta it was a perfect 11pm dinner! 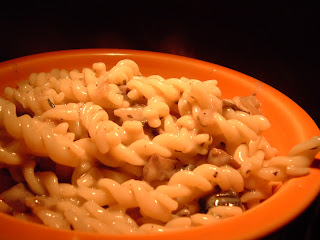 Today is Sunday, so that's my day to really pull off a great dinner. We eat dinner together as a family several times a week, but Sunday I try to make something really special to look forward to. Unfortunately, I felt like crap all day and didn't think I'd have any energy to cook. But I got a great idea to use up last year's bumper crop of pesto (before we harvest this year's basil). I made two big batches of pizza dough and added 3 ice cube sized things of pesto to eat batch. The crust looked kinda green which might be a turn-off to some people, but it smelled and tasted great! It would be really nice for foccacia bread, too. The toppings were local red onions, martini olives, green peppers from the garden, homemade tempeh sausage, and an awesome quick "cheese" sauce modeled after the late great Spokes Pizza in Minneapolis. 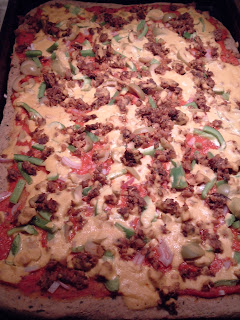 This close up makes me want to go to the fridge right now and eat the leftovers! But I'll be happier if I wait and eat them for breakfast. 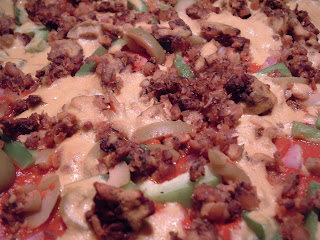 After all the talk on the PPK about Isa's PB Caramel Apple Bars, I really wanted to try them. And when Mike walked in the door with 3 bags of free Granny Smiths, I knew this was my chance. 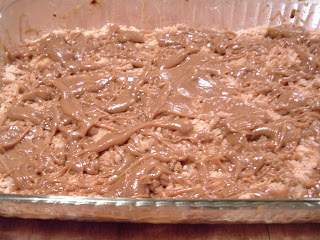 WOW! Even just the Caramel PB Sauce is enough to make this amazing, not to mention the crust, apples, and crumble topping. 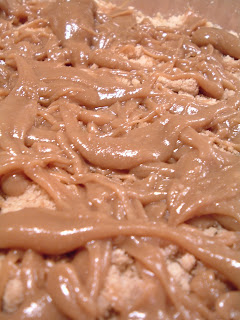 Next time I'm going to try the topping and sauce on top of a thick apple pie, though. The toppings are a bit rich for such a thin bar... But maybe I'm just a wuss.
Posted by Liz at 7:40 PM 2 comments:

Breakfasts and an Easy Dinner

I don't usually make fancy breakfasts because I generally prefer leftover stir-fries, pizza, or bagels for breakfast. But when I have time I like to make a nice breakfast for the family. The last two really good breakfasts I've made were using new recipes. The first is Susan's Vegan Omelet for One, only quadrupled. I filled it with sauteed onions and kale from the garden and the Gee Whiz cheese from the Ultimate Uncheese Cookbook. I love that "cheese" by itself, but it was so similar to some of the ingredients in the "omelet", that it made the texture of the omelet seem too undercooked (it was a bit undercooked anyways because I had the flame too high and it browned too fast). But really, this is so close to a real omelet that it's almost scary. Very versatile and the kids loved it! I'll definitely try it again. 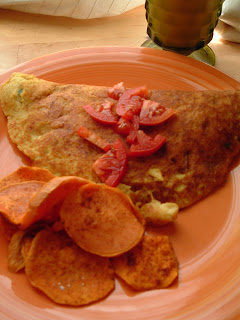 I baked some thin slices of locally grown yams and sprinkled them with coriander, cumin, and salt to serve with the omelets. They were crispy and really tasty! 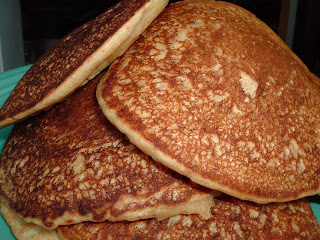 My next good breakfast is these cornmeal pancakes. I just substituted Earth Balance for the butter, rice milk with vinegar for the buttermilk, and Egg Replacer for the eggs. They look just like regular pancakes, I guess. But they are corny! The kids enjoyed them with Earth Balance and maple syrup, but I was excited to try them with a savory topping. So I melted some Earth Balance and mixed it with the South River Miso Company's Garlic and Red Pepper Miso. WOW! It was great- Now I'm mixing that miso with my Tofutti cream cheese on my bagels, too. (But I just noticed that I don't see that variety of miso on their website anymore...But the Dandelion Leek Miso looks good as well. And in another 9 months I'll have more homemade miso than I know what to do with.) 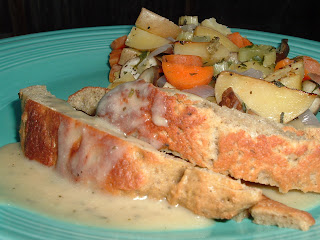 Tonight I got home from a long day of work at around 5:30pm. Mike and the boys were out exploring, so I quickly put some dinner together for when they got home. This looks complicated, but only took about 30 minutes. I made my favorite secret recipe for fake chicken breasts made from wheat gluten that is ready (mixing and baking) in 20 minutes and I chopped up potatoes, onions, carrots, celery, and one lonely garden eggplant with salt, pepper, fresh parsley, sage, and oregano. I sealed the veggies in a baking dish with foil and baked them at 450 for about 30 minutes. While those were baking I mixed up an Apple Buckle. I know the recipe calls for blueberries, but this is my favorite buckle recipe and I have tried it with peaches, mulberries, and cherries (separately) with great results. I also mixed up some gravy that was so good I later stood in front of the stove for a good 15 minutes, breaking off little pieces of "chicken" and scooping up the last of the gravy.
We washed this all down with Hoch Orchard's local apple cider. The best! 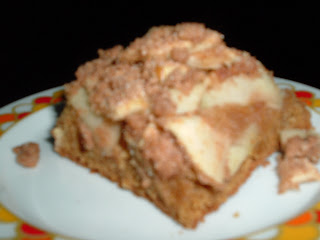 The picture of the buckle to really bad. But I think you get the idea: Cakey on the bottom, apple slices in the middle, and crumbley on the top. Like apple crisp on top of cake! You can't beat that!
Posted by Liz at 9:11 PM 1 comment:

I feel the need to explain the title of this blog so that no one thinks I am a snob in general. I'm not. I'm just a food snob. And that doesn't mean I'm a picky eater- That's different.

When I go back home to Texas or go out to dinner with someone for the first time...they usually learn that I'm vegan and comment about me being a picky eater. Boy, do I hate that. I consider picky eaters to be children who refuse to eat any vegetables on the basis of fear or distaste. Or maybe folks who have more than 10 random foods that they just will not eat in any quantity for some unexplainable reason.

A vegan who abstains from animal products because of firmly held ethical beliefs about the value of animal lives or the environment or human health is not a "picky eater". That's living your life in accordance with your beliefs (As is eating meat if you believe that is ethical for you). I eat damn near everything except for things that come from animals. Any kind of fruit, vegetable, bean, or grain is welcome on my plate. I'm really not that picky.

But I am a food snob. Given the option, I'll choose to have the highest quality produce, the most fair trade, local, organic, sustainably grown foods I can find, prepared carefully with thought to balance of flavors, textures, and presentation. I'd prefer my onions slowly carmelized, with slightly browned edges (But I'll eat them still crunchy if that's what I've got). I'd prefer my tofu pressed, patted dry, heavily marinated, and baked until it is crisp on the outside and springy, delicately soft on the inside (But I'll eat the prepackaged kind cold out of the plastic wrapper, too). I'll spend all day on a meal: baking bread, harvesting vegetables, roasting seitan, rolling out pie crusts (But I'll swing by Chipotle if that's what I have to do).

Basically, I want the best quality food I can get. That's why I cook at home so much. If I control the preparation, I can make the food just like I want it. Of course, that's not always an option. But given the option: I'll be snobby.

So in this blog I'll share the foods that I love and you can take 'em or leave 'em. I like to write about food, take pictures of food, and eat food. You'll get to read stuff and look at pictures, but you'll have to cook it yourself if you want to eat it too. Feel free to change the recipes to make them suit your tastes- I might be a food snob, but that doesn't mean I know how you like your food.
Posted by Liz at 9:30 PM 2 comments: