I had some really exciting things planned to post about this past weekend, but my body didn't cooperate.  My "meals" were pretty much limited to ginger tea and saltine crackers until yesterday.  I guess I had a stomach bug because I spiked a fever and was really nauseous Friday and Saturday.  I didn't feel nauseous or have a fever on Sunday- just weak and woozy.  Now today I'm mostly dizzy.  Dizzy Lizzy.

Nearly a month ago I went to the doctor because I'd been having severe headaches a couple times a week for 2-3 weeks along with dizziness and general "off" feeling in my balance.  The best way I can describe it is the feeling that I usually get when staring at a big wall that's covered in all polka dots or all stripes- Like my eyes don't know where to focus and then I feel like I'm moving.  I got plenty of tests that showed I had no nutritional deficiencies or liver issues or blood pressure problems or fetuses growing.  So the doc recommended that I get a brain MRI to rule out anything bad.

I thought he was jumping the gun a bit about this test and wasn't super excited about draining my HSA account, so I decided to wait and see if the symptoms persisted.  After the appointment I didn't have any more headaches... until this past week.  And the dizziness wasn't too bad... until this week.

So tomorrow morning I get rolled into the MRI tunnel.  I hope that nothing's wrong, of course.  But I also hope they figure out why I've been feeling so weird.  I'll keep you posted-

Until my appetite is back, though, I won't be doing too much cooking.  Everything still sounds gross.
Posted by Liz at 11:38 AM 8 comments:

I have a little problem with oils and vinegars.  Much like spices, I love them a little too much and tend to buy any that look new or interesting.  Imagine my delight upon entering Vinaigrette, a shop that has dozens of super high quality olive oils and vinegars on tap.  Yep.  That means you get to taste any and all of them (I did). 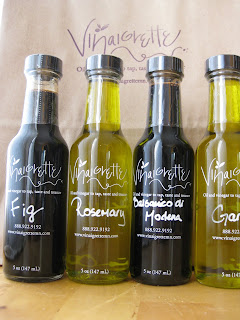 These were my favorites of the bunch: Fig and Balsamico di Modena vinegars and Rosemary and Garlic infused olive oils.  It was a tough decision, let me tell you!  There's something really special about being able to hear the story of each of the farms and families that produce these oils and vinegars.  Each one was unique in flavor and history and I really wanted to take them all home with me.  Plus, where else can you go to talk about oil and vinegar for 40 minutes?  No where.

I drank tasted plenty of oil and vinegar on Friday, but Saturday morning I wanted to put this balsamico to good use with my breakfast, so polenta seemed in order. 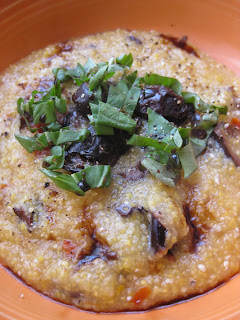 This is soft polenta with oil-packed, home-dried, home-grown cherry tomatoes and oil-cured black olives topped with fresh basil and lots of black pepper.  And drizzled with balsamico, of course.  It was insane, really.  I could get used to this kind of breakfast.
Posted by Liz at 10:03 PM 4 comments:

It's terribly hard to resist planting seeds when it's been sunny and warm and will be warm for the next week.  My heart says, "Just plant!  Imagine how early your green beans could be!"  But my brain says, "No!  You know it's never safe to plant before Mother's Day in this climate!"

For now, I'm enjoying the perennials that have have decided to start growing again, despite the ever-present risk of cold weather in April.  I have some newcomers to the garden this year and I'm proud to say that they survived the winter! 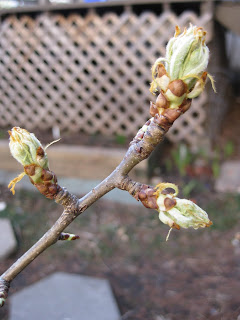 The Pear Tree is budding! 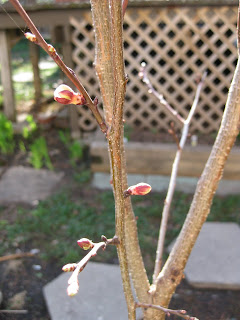 The Apricot Tree is budding!
I can't wait to see how these little trees grow this year.  I'm not expecting any fruit, but I'm hoping that next year I'll get a few pieces.  Our apple tree is leafing out nicely, too, but it won't produce fruit this year. That's okay because I still have 8 quarts of applesauce from last year's harvest! 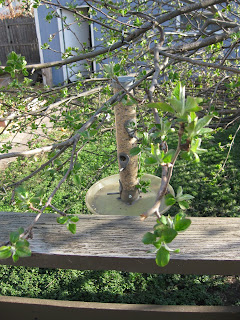 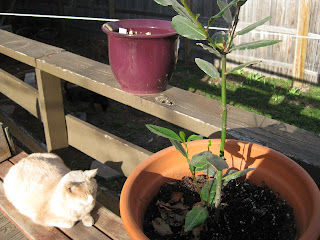 Here's the bay tree- It grew quite a bit indoors over the winter and shot up another couple inches this past month.  I'll have to prune it back next year to fit it in the house! 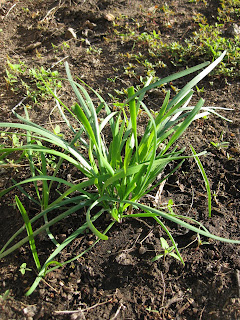 The chives are already looking happy 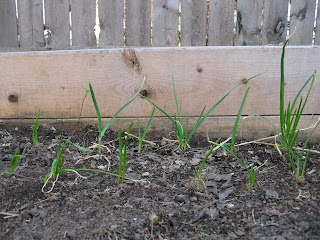 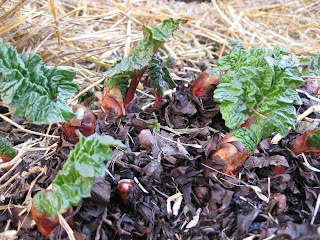 The rhubarb is just poking its leaves out of the ground now.  Rhubarb crisp is still a ways off... 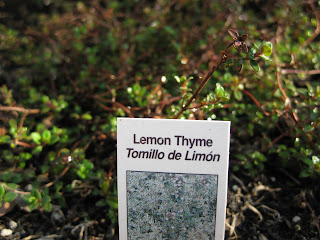 This lemon thyme wins the heartiest plant of 2009 award.  I forgot to water it all the time and it just has a little box to grow in.  But as soon as the snow melted, it greened up and started sending lemony scent into the air.  The kids like to steal little leaves to chew on.
So there's not too much to eat out of the garden yet, but there's potential...And I haven't even planted anything yet!  I love perennials!
Posted by Liz at 3:13 PM 2 comments:

There aren't too many locally grown vegetables in Minnesota right now, and I can't help but enjoy a few springy treats, especially when they're looking so good!
I try not to be size-ist, but I must admit that I don't like fat asparagus.  I like asparagus that's tall and slender and uniform in size.  So when I saw this bunch at the co-op, I had no choice but to buy it.  Just look at how perfect they are all lined up on my griddle! 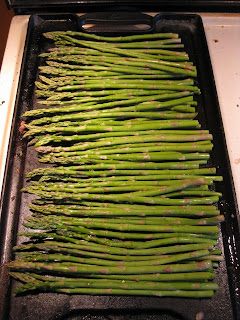 Just a few minutes on the griddle and these were bright green and tender. 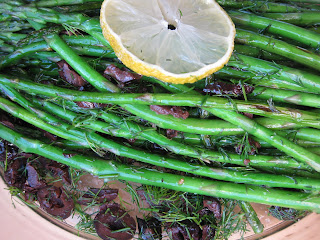 The asparagus was plenty flavorful, but I added lemongrass oil, fresh dill and oil cured olives.  Yum!
Fresh peas are far from being harvested here, but frozen peas are second best.  I used Jae Steele's recipe for pea soup and it felt so fresh and healthy!  I didn't have pumpkin seed butter, so I just used tahini instead.  The soup was creamy and simple and very bright spring green! 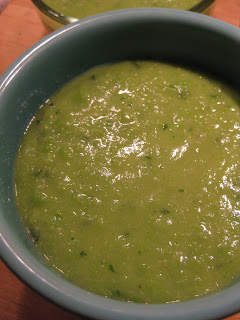 Cold grain salads aren't usually something I even consider eating until it's sunny outside and summer is in sight.  Wild rice salads are perfect for cool spring weather, though, because they're hearty and light at the same time.  I snipped some chives from the garden (basically the only thing usable so far!) and chopped some walnuts, green onions and crasins for this salad.  The dressing is just a bit of lemongrass oil and umeboshi plum vinegar- But any vinaigrette would be nice. 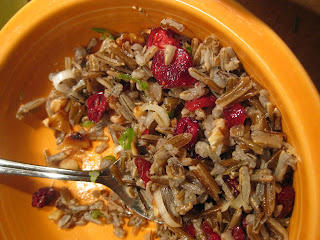 This one is great packed in a lunch because the flavors get better the next day.
These spring-y meals have been really delicious, but I really can't wait for the local produce to start coming into the co-op and for my garden to get going.  Next time I'll show you what's starting to grow out there.  Soon it'll be planting time!
Posted by Liz at 9:55 AM 7 comments:

Mike's birthday was last week- He requested no presents and no parties, so he got a casserole instead.
This isn't just your average casserole, though.  (Maybe I should say "hotdish" now that I've lived in Minnesota for 10 years?) Mike loves potatoes in all forms, so I made a triple potato hotdish for his birthday breakfast. 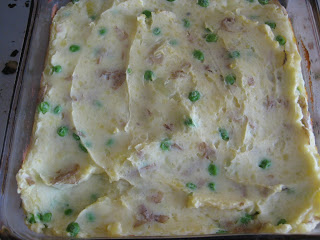 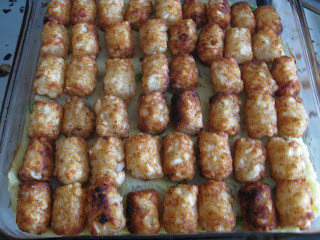 The second layer: Cascadian Farm Organic Spud Puppies.  Mike's love of spud puppies is surpassed only by his love for me, the kids and banjos, in no particular order. 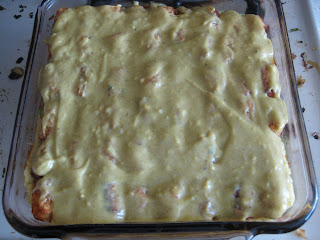 The third layer: cheezy nutritional yeasty gravy.  Because if you're going all-out with potatoes, there's got to be gravy involved. 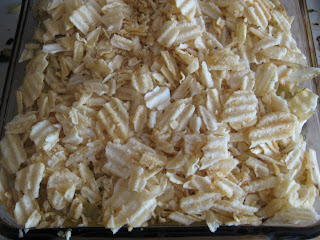 The fourth layer: crushed potato chips
This casserole barely made it onto the table.  I thought it would be nice to broil the top of the chips so that they browned nicely.  I wouldn't really recommend that you try this.  Potato chips are little grease bombs just waiting to catch fire.  I'm going to try to remember this next time we're camping and need to get a fire started. Luckily, my oven escaped going up in flames (all the other appliances have broken this month, so why not the oven, too?) and I was able to scrape off the little flaming charcoal chips and top the casserole with freshly crushed, unbrowned/blackened chips.  Despite the drama and distinct smokey flavor, this casserole was amazing!  Super rich, totally indulgent and very potatoey.  Then we had dessert!
Dessert had to be gluten free, soy free and vegan.  Not super easy.  Mike's been switching up his diet lately and soy is the latest thing to go.  He's not so strictly vegan anymore, but he's feeling really good- Hooray! 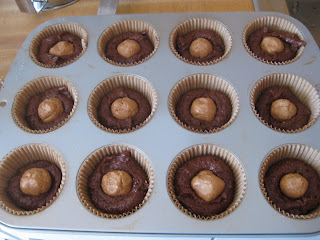 Chocolate Peanut Butter is a pretty rockin' flavor combination in any form and this was no exception. I made little peanut butter, powdered sugar, and vanilla balls to hide in the center of the GF chocolate cupcake batter (I use an adaptation of the GF cupcakes from Vegan Cupcakes Take Over the World). Then I top with more batter and bake. 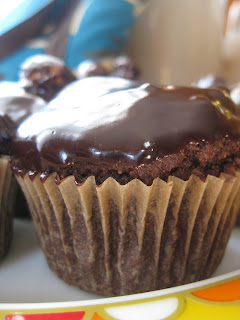 The finished cupcakes were topped with ganache for a quick and easy frosting.
Now I just have to think of another excuse to make that potato casserole.  I think the dog's birthday is coming up.  She'd want us to eat a nice breakfast in honor of her birthday, I'm sure of it.
PS- I was really lazy about posting this past week, but I've got tons of photos to share of springy meals and beginnings of this year's garden.  Look for them this week!
Posted by Liz at 6:53 PM 5 comments:

The good news is that I have HomeSmart appliance insurance from my gas/electric company and get $675 towards a new fridge since my beloved one died.  The even better news is that Fridgidaire decided to change their handle design and the old handle fridges were crazy on sale at Warner's Stellian.  I got a new stainless steel fridge for $699!  The repair guy said that the "all fridge, no freezer" models tend to die faster, so this one is a regular ol' fridge/freezer.  Hopefully this one will last longer!

The bad news is that there's lots of spoiled food in the kitchen right now that I have to dump in the compost.  I'm not looking forward to that.  I hate wasting food.  And it'll be interesting cooking this week.  Planning meals that don't use a fridge is sort of like planning for meals while camping...Except I get to sleep in my soft bed.  I don't do very well with cooking just enough to eat at one meal.  I like leftovers! So I predict lots of sandwiches and eating a the co-op's salad bar.  I might use up all my frozen and pickled vegetables, though!
Posted by Liz at 7:56 PM 6 comments: