Quiche with Shiitakes and Chard 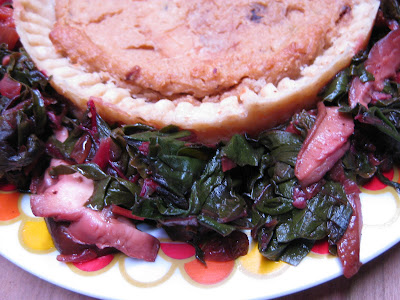 I've been craving pie lately, but not sweet pies. So today seemed like the perfect time to try Isa's Caramelized Vidalia Onion Quiche. The co-op has some gorgeous locally grown organic sweet onions! I decided to make it in a tart pan instead of a traditional pie pan (mainly because my pie pan appears to be missing...) and ended up with enough crust to make a mini pie!
I used a 3-inch springform pan for my mini pie and it was totally dreamy having a "whole" pie to myself! The crust was super flaky- hooray for Earth Balance and white flour!
On the side I had some chard. I'm a little obsessed with Mississippi Market's new recipe for sauteed chard. It has pinenuts and raisins and garlic and lemon. I know, I know. Raisins sound weird in there. But they're really good and I'm a raisins-in-things-hater.
I cooked my chard a little differently tonight, but I did include raisins!
Sweet and Savory Shiitakes and Chard
1 Tbsp. olive oil
1/2 red onion, chopped
3 cloves garlic
6-8 shiitake mushrooms, stems removed and sliced
2 bunches of red chard, stems finely chopped and leaves roughly chopped
2 Tbsp. lemon juice
2 Tbsp. chopped black or kalamata olives
3 Tbsp. chopped raisins
Dash of Bragg's Aminos or soy sauce
Heat olive oil in a large skillet. Add red onion and saute until onion is nearly transparent. Add garlic, shiitake slices and red chard stems (not leaves). Continue to cook for a minute or two, stirring frequently to prevent garlic from browning. Add chard leaves to the pan and cover (shove them all in there and use the lid to keep 'em in place. The pan will be very full!). When chard has wilted, but is still bright green, remove from heat and add lemon juice, olives, raisins and a dash of Bragg's or soy sauce. Serve immediately.
Posted by Liz at 7:45 AM

chard and quiche sounds like just what i need for breakfast right now. mmm!

That looks so tasty, and very creative!
And surprisingly a flaky vegan crust is possible, despite what people may think. :).

This looks GREAT! Anything with caramelized onion is going to make me drool. Yum!

I have been wanting to try that quiche for forever, I can't believe I haven't gotten around to it yet. I like to do Chard with raisins too, and nutritional yeast. Mmm.

I've done chard with raisins and pine nuts before, too . . . I think it was a "Real Simple" recipe. (I think there may have even been chickpeas in there!) Anyhow, it was delicious! Your tart looks amazing!