I made some coconut bacon yesterday and thought I was creating something new and amazing...But it turns out that it's not a new idea. Really, it's not new. Even the Royal Bacon Society knows about vegan coconut bacon. But it's still delicious! My recipe is not really any different than any of the afore-linked websites. But I tried mine cooked up in a well-seasoned cast iron skillet rather than an oven. Here's what it looked like: 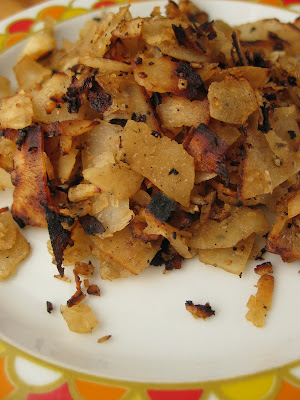 I ate darn near half of it before it even went into the skillet. And then I promptly ate the other half. This is definitely as addicting as regular bacon. It's fatty, salty, crisp and all around bacony. The kids loved it, too. But Mike said, "It tastes like coconut". Party pooper.
I mixed together the following:
1/2 cup large coconut flakes (I used the "Let's Do...Organic" brand, which wins the award for stupidest brand name)
4 drops liquid smoke
2 Tbsp. Bragg's aminos
1 Tbsp. maple syrup
1/2 tsp. balsamic vinegar
Lots of black pepper
I marinated it overnight and then fried it up in a hot skillet until the edges of the flakes were starting to almost burn. Yum! Baking it would probably make it crisper, but I had no problem munching on it this way and it took all of about 1 minute to cook.
Posted by Liz at 11:47 AM

Easiest recipe I have seen. Will have to try.

If "Let's Do... Organic" is the dumbest name, "If you care" has got to be the second most awful brand name, with extra points for self-righteousness.

Ooh, yum! Will have to try this out.

Okay, I was skeptical when I saw the title of your post, but that looks SO good!

I LOVE bacon but I hate coconut...I'm torn. I think I need to give it a try though, it looks so simple!

okay, I am not one of the enlightened few, but "I" certainly hadn't heard of coconut bacon before!

The hubster would most likely be a comparable party pooper, - but not without having emptied the plate of any leftovers ...

This recipe sound disgusting but great and interesting at the same time. How can it be? I mean I consume coconut but the idea of eating it savory has caught my attention. I can see why u use coconut because of the great texture it can make. It really is something. I have a coconut here I want to try and as the other poster said it looks really good. It is something new for me!

Who cares if it's new or not (it's new to me)--it looks DELICIOUS!!

Sounds desish. I will have to make this sometime.

It's new to me! I've heard of it but I've never made it! It looks tasty!

I've never thought of using coconut flakes for bacon. I'll try making a raw version in my dehydrator and see how it turns out. Thanks.

That seems like it would make good "bacon" bits, vey crispy.
http://whatyourmommadidntknow.blogspot.com/

I just made this for the first time and IT WAS DELICIOUS.