My Weekend in Food

I kept meaning to post some of this yesterday, but here we are at the end of the weekend and I have a ton of pictures to share.
Yesterday I chilled out all day, knitting, reading, and snuggling with the dog and cats.  I left the house to give Mike and the kids a ride and grocery shop and that was it!
Lunch was awesome- the last of the leftover black beans and broth, pureed into a simple black bean soup.  The really exciting part was the toppings, though.  Avocado, green onions, cilantro, and crushed chips! 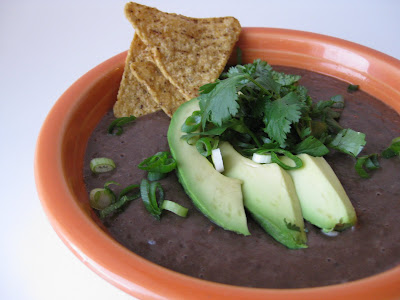 Today I was really excited to try making Karina's gluten free foccacia bread.  Her pictures look amazing and I haven't made Mike any bread in a while.  I made a few substitutions because I don't keep sorghum flour on hand, but other than that I stuck to the recipe.  Here's the dough going in the oven to rise. 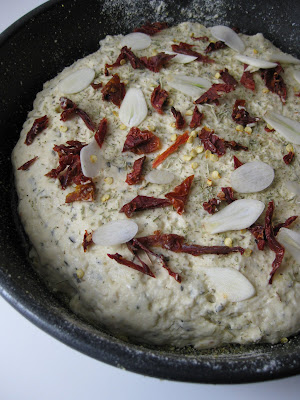 I'd show you a finished product, too, except that the dog ate the whole damn thing before I could take a picture or taste it.  She is an evil beast sometimes.  Now she has a stomach ache and it serves her right.  How could she even reach this bread?  I had it WAY far back on the counter.  I think the cats helped her.
My lunch was a simple, but tasty butterbean soup with crackers.  I love butterbeans like you wouldn't believe.  Here they are cooked up with about 8 cloves of garlic, onion, carrots, celery, and lots of rosemary, thyme, and lemon.  It would have gone great with foccacia... For dinner Mike and I went to Cat Man Do, a ew-ish Nepalese/Tibetan restaurant on Grand Ave.  I feel a bit like a traitor going there because we usually go to Everest, another Nepalese/Tibetan restaurant on Grand Ave.  I now know that I prefer Everest, but I had to try the new place!
We started with Pyaji, jalapeno and onion strips battered with chickpea flour and deep fried.  There is no way I could not love this dish.  Served with mango chutney and another sour/sweet red sauce.  Yes, we were playing Boggle in the restaurant. 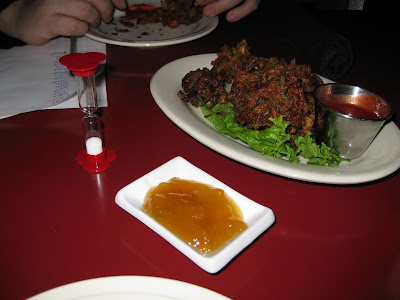 Next I had a simple vegetable soup, which sounded pretty average on the menu and was really delicious.  It had asparagus, mushrooms, onions, other little veggies and herbs...and something.  I couldn't place any of the spices because no one really stood out.  But this was very flavorful! 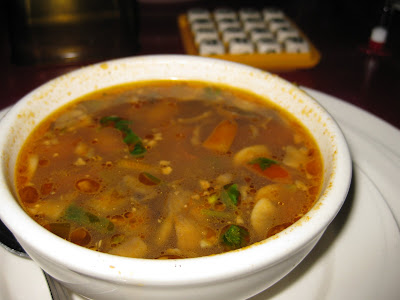 Last, but not least were the momos, steamed dumplings filled with spinach, onions, and I think cabbage.  The momos were not as good as at Everest (these were a bit dry and not as tender), but were still tasty because dumplings totally rock.  I was just reading about the history and making of dumplings across Asia this morning, so I HAD to order these! 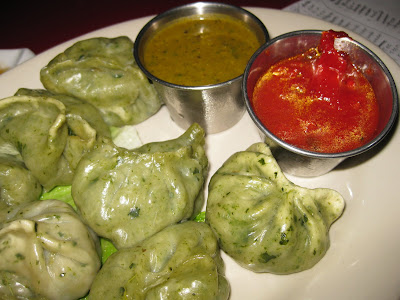 All in all, this weekend contained some pretty delicious food.  Maybe I'll get a chance to re-make the foccacia bread soon.

You play boggle in a restaurant!

Liz, I am unemployed right now! Let's get together! xo, M

Your dinner out looks fabulous!

I can't believe your dog ate all the bread. Surely the cats were her partners in crime.

I'm so sorry about your foccacia bread! And I'm even sorrier that your story cracked me up *blush*. I can just picture your dog, with eyes like saucers, thinking all her Christmas's had come at once! Plus things like that happen to me all the time (like the cat paw print in my puff pastry~hmmm your cats definitely helped her).

oh man. i cannot believe your dog ate your foccacia! how incredibly sad... i bet it was yummy though. your soups look great, as do those dumplings at the restaurant! i so, so wish that there was a place around here that i could order dumplings like those. i had them once in new york...but while i'm stuck in wv, i'll just have to make my own, i guess. bummer, since i probably won't, haha...

Your black bean soup inspired me to make some of my own last night! Your's looks more scrumptious, I'll admit, but I was pretty happy with my outcome too!